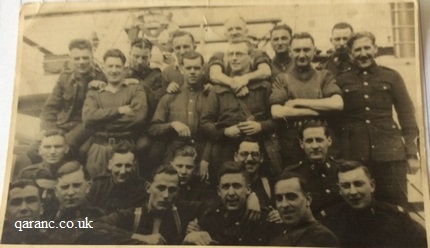 This photograph is from the collection of Robert Charles Watson, known as Bob. He is in the second row from the back with his arms folded and wearing the polo neck jumper. He took part in the Dunkirk evacuation.

His sons recall that there was a photo of army chaplain Rev Cecil Robert Ellis who they think was attached to the St David and killed at Anzio a couple of days before the St David was sunk. Their dad thought highly of the reverend and he even named his first son after him.

There is a memorial to the army chaplain Reverend Ellis (who their dad referred affectionately to as pop) at the church in Didsbury in the form of a prayer desk.

Sadly, on the night of the 20th February 1944, the Saint David was sunk whilst at sea during an air raid by the Germans as she was helping the wounded. It took just 6 minutes to sink, giving the Queen Alexandra's Imperial Military Nursing Service nurses and RAMC orderlies little time to save their patients. As a result, the Commanding Officer, two QA nurses and several RAMC orderlies went down with her (cited in the book Women Who Went to War

The lost nurses were Sister Winnie Harrison and Sister Sarah Elizabeth Dixon and you can read more about them on the War Graves Memorials to Nurses page.

There is a first-hand account of its sinking by a nurse survivor on the page about Assistant Matron Elizabeth Sinclair.

One of the engineers who survived the sinking was married to a member of the Territorial Army Nursing Service .


Read more about the Hospital Ships of both World Wars.