Buried in the Schoonselhof Cemetery in Wilrijk, near Antwerp, Belgium is Queen Alexandra's Imperial Military Nursing Service (Reserve) Sister Audrey Mary Blackman. Below is a photo of her gravestone. 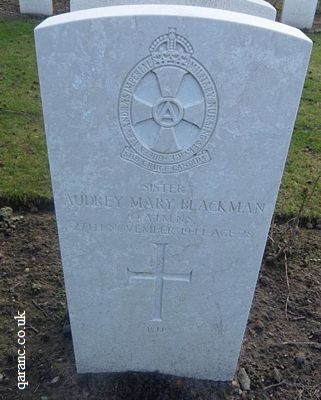 At the top of her headstone she has the white cross and A for the Queen Alexandra's Imperial Military Nursing Service and under this is the Motto sub cruce candida, which is Latin for under the white cross.

She was the daughter of Albert and Alice Mary Blackman, of Hayes, Middlesex and was born in March 1917 and died on Monday 27th November 1944, aged 28 years. Her service number was 318419. Her memorial reference is I. A. 35. We do not know her cause of death and would welcome more information about Sister Blackman. If you can help, then please contact me.

What if the loss of a child was not every parent's worst nightmare?

Hamish and Alison wake to some awful news from the police banging at their door, but what if their trauma was only just beginning?

Read how these former army nurses copes with their grief through to a terrifying ending.

is my new novel, available in Paperback or Kindle and other devices.

Read the Opening Chapter for Free.