Pictured is Ethel Hutchings, Queen Alexandra's Imperial Military Nursing Service, on the back of the photo is inscribed "Ethel with her men at Blackrock, Dublin." She also saw service with the QAIMNS in Alexandria, Egypt, and at the Bombay Presidency General Hospital. She was also stationed at the Sassoon Hospital in Poona, India. 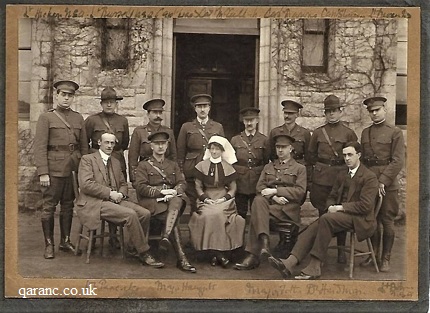 In 1917 she received the Royal Red Cross for her nursing service during the Great War. A newspaper clipping of the time read:

Decorated by the King
Nurse Honoured

Sister Ethel Hutchings, who has been invested by the King at Buckingham Palace with the Royal Red Cross for devotion to duty, was afterwards received by Queen Alexandra at Marlborough House, who gave her a book with autograph and picture. Sister Hutchings is a daughter of the late Reverend. Edgar Fitzhenry Hutchings (and his wife Adeline Beatrice Gregg), rector of Heynestown, and a sister of the present rector and of Mrs. John Boyce Macartney (nee Maud Eleanor Hutchings), 28 University Square, Belfast, and Mrs. Barcroft (nee Irene Hutchings), The Rectory, Sixmilecross. She was formerly at Mercer's Hospital, Dublin, but since the outbreak of the war has been engaged at the Military Hospital, Curragh. 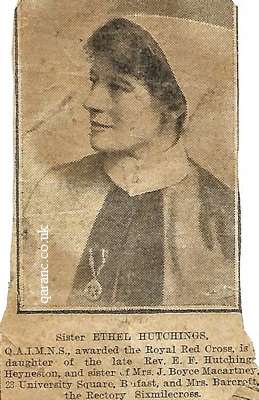 Ethel never married. She worked for the Ministry of Pensions for many years.

Ethel Sarah Hutchings was born in Queensland, Australia, on 9th January1880. Her parents and family had moved there from Ireland in about 1878, but they returned to Ireland and were living at Markethill in Armagh at the time of the 1901 census.

British Nursing Registers show that Ethel was certified as a nurse between 1907 and 1911 at the Derbyshire Royal Infirmary in England. 1911 England census shows she was working as a hospital nurse.

For her World War One service she was awarded the British War Medal and the Victory Medal.

On 29th September 1929, Ethel wrote in a letter to a relative in which she said:

I trained as a hospital nurse and during the war was made Superintendent of Royal Military Hospital and have been here ever since, but it is now under the Ministry of Pensions."

A newspaper item from the Somerset County Herald, dated 14th June 1947, reported that Miss Hutchings, Matron with the Ministry of Pensions Hospital at Musgrove, Taunton, had received the award of M.B.E. (Civil Division) (Member of the Most Excellent Order of the British Empire).

These describe Miss Hutchings as being Australian born and now has relatives living in Dorset and has been a matron for 30 years. She was an Army matron from 1917 until 1920 and since then has been a matron at the Musgrove since the hospital was taken over in February1946.

Ethel died on the 26th February1965 at Wandsworth, London, England.

With grateful thanks to contributor: Janice Moerschel, who is the first cousin, twice removed, of Ethel.