Southfield House Auxiliary Military Hospital, at Station Road in Duns was a Victorian Mansion used as a convalescent home for wounded soldiers from the First World War. The Dunse History Society received a donation of books and personal records from the Speedy sisters. The youngest, Margaret May, was a volunteer nurse there and during her duties she would ask her patients to write about their war experiences. Some penned letters, whilst others wrote poetry or drew cartoons. This fascinating book compiles these insightful and historical first-hand accounts of the Great War into The Soldiers Remember. 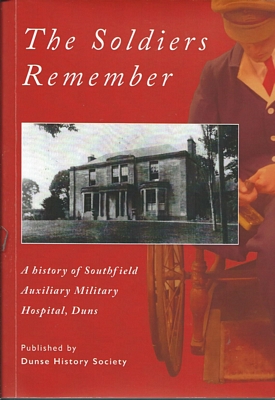 It is fitting that in this Centenary year of World War One that we hear and see a collection of those who fought for us. There are recollections of trench warfare, the first use of chemical gas on the battlefield, German atrocities in French towns and villages, personal thoughts and feelings in word or etched in pencil sketches and many accounts of their wounds, immediate battlefield treatment and the chains of evacuation and of their care back in Britain.

These brave men may be no longer with us, but seeing their written words, diary entries or images ensures that their memories live on and teach us through this wealth of material. This includes rare insights into the preparation of the buildings for large groups of patients, such as the urgent redecoration and the supply of rations such as fresh fruit and vegetables from the village. It even details donations from individuals such as Mrs Cameron donating marmalade.

As an example of one soldier's memories of the battle of Mons, Private Ronald of the 2nd Battalion The Royal Scots British Expeditionary Force wrote:

On the morning of the 23rd August 14 we marched to the outskirts of the town and prepared trenches for use against the Enemy. About noon Sunday 23rd Aug 14 the enemy came in touch with us, and shortly afterwards made their first attack, giving us our first experience of Warfare. They came on like a crowd coming from a football match and we simply mowed them down like sheep. They retired before reaching our trenches, but not for long, they came on again with the same result. Yet again they came and it was awful to have to cut men down as we had to do on our first day's fighting, but our opinion has changed since that.

Many Regiments and Corps are represented in the book, highlighting the diversity of the patients. For example, Private McGlynn of the Royal Army Medical Corps found himself a patient and wrote poetry, here is his poem:

Oh, where are they, the gallant band
Our men who marched away,
With tear filled eyes on either hand -
None so beloved as they?
Into the vortex they were cast,
Going where duty led,
Facing the foeman's withering blast,
Holding the salient firm and fast;
Victors! But joining at the last
The bivouac of the dead.
On Fame's eternal camping-ground
Their silent tents are spread,
And Glory guards with solemn round
The bivouac of the dead.

There are also many historical photos of wards and the Voluntary Aid Detachment, Matron and Sisters at Duns and nearby hospitals such as Lennel House and Manderston Auxiliary Hospital at Coldingham.

I would recommend The Soldiers Remember to anyone with an interest in WWI and the care and treatment of soldiers.


Read more about the Auxiliary Hospitals.