Information and history about the British Military Hospital in Rinteln with photographs: 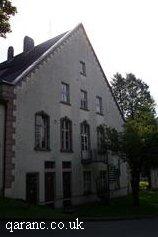 BMH Rinteln was one of several BAOR (British Army On The Rhine) army hospitals in Germany. It is now closed.

by Juliet Piggott has a photo of QA nursing staff working on the families ward of the British Military Hospital Rinteln.

BMH Rinteln was previously an RAF unit in the late 1940s soon after World War Two. RAF Rinteln was then mainly staffed by Royal Air Force personnel though there was a small detachment of officers and other ranks from the Royal Army Medical Corps (RAMC) and a small number of QARANC sisters.

The book Sub Cruce Candida: A Celebration of One Hundred Years of Army Nursing


Sadly none of the QARANC.co.uk team had a German posting and would love to expand this page with more details about the hospital and include a photograph. If you are a former or serving member of the Queen Alexandra's Royal Army Nursing Corps we would love your help.


The following images of BMH Rinteln have been kindly provided by Phil Basford (Maj Retd RAMC) and were taken in 1959. I used to get into trouble for waking some of the children up early (5am) to feed the deer through their ward window - they loved it. 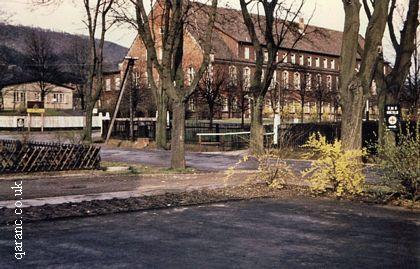 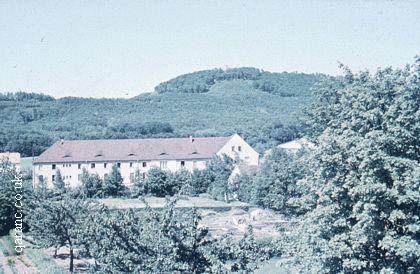 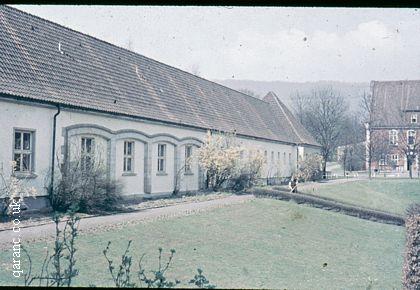 The two photos below are from the mid 1970s and we think they were the first Introductory Course to come straight out to BAOR.

The orienteering team at BMH Rinteln which Phil says: was relatively successful, many of the trainee nurses (men and women) experiencing it for the first time. We played and worked hard.


The student nurse in uniform is Anne Perry (nee Taylor), behind her is Dave Minden wearing yellow, in the burgundy jumper is Chris Higham, wearing the woolly hat is Ann O’Neil and wearing green is Lesley. Can you please help with other names?

You may see some of the same faces when we visited Kaiserswerth on a regular 'history of nursing' visit. 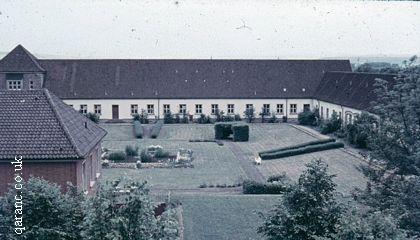 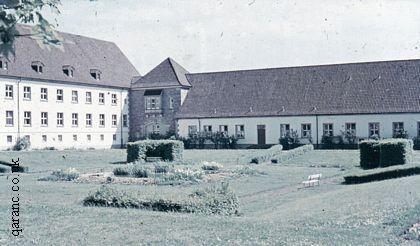 The entrance to BMH Rinteln from 1959 below can be compared to a modern day photo underneath and seems not to have changed much. 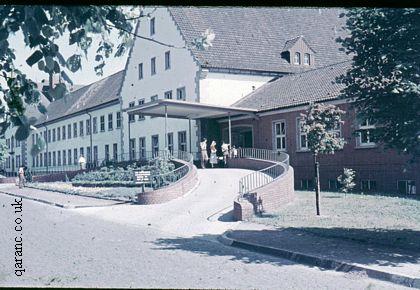 The photograph of BMH Rinteln below was taken in 2007 and the building is now being used as a sheltered housing scheme. For more modern photographs of Rinteln, Hannover and Berlin please visit
https://www.pbase.com/sasaferrato 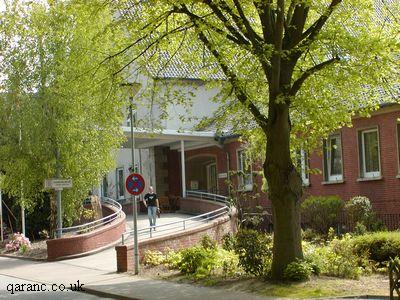 Other parts of the old BMH Rinteln buildings and grounds are being used by the German charity Lebenshilfe whose website can be found at www.lebenshilfe-rinteln.de/

The first memory of BMH Rinteln is of a former patient who went to Germany with her husband and was a patient in the maternity unit and the hospital wards and out patients:


As a wee lad I was in Rinteln at least twice between about 1956-59 with the usual childhood complaints like tonsils. I have a vivid memory of being on a small ward when a nurse asked me "Have you moved your barrels today?" Aged 8 or 9 I hadn’t a clue what she meant and was very confused because I’d been playing with a Dinky toy lorry that did indeed have miniature barrels as its cargo. I must have looked as daft as I felt because she patiently explained that to "move your bowels" meant had you done a "number 2"! I lived in Germany from 1954-1959 and then in Singapore 1959-1962 and also remember Alexandra Military Hospital in Singapore and its various outposts where we used to go for 6-monthly cholera jabs (ow!) and a supply of salt tablets. So I must have been a "customer" of you or your esteemed colleagues on a number of occasions. I can certainly remember bright red capes and very impressive headgear you don’t see in hospitals these days. All the best. Roger White.

In 1969 we were posted to BMH Rinteln. We lived in quarters in Buckeburg before moving to a beautiful hiring up in the hills of Schaumburg. Im Tiergarten overlooked the Weser Valley. We had a massive garden which went up to edge of the woods below Schloss Schaumberg. In the winter, deer would come down to forage for food and we would watch them through the huge window in the living room. From the kitchen window we could see the farmer harvesting his hayfield with a scythe along with friends, family and neighbours. A communal bailing machine would come and make hay bales. I once saw the same farmer tie a pig by its leg to his barn door in preparation for its slaughter - poor thing! I do not think he would get away with that today! 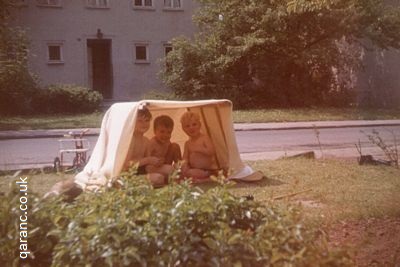 Our second son, Christopher, was born in BMH Rinteln in 1970. Paul attended the army school in Buckeburg. Buckeburg had a castle with a moat along with lovely gardens and parkland. In the winter families would ice skate on the moat. They would also ski down the slopes at the back of the army school. I well remember having to clear the deep snow away from the paths in front of our ground floor flat - you were personally responsible for this task. There were all sorts of obscure laws - no washing to be hung out or lawnmowing done on Sundays for instance. Our last posting was Tidworth Military Hospital from 1973-76. 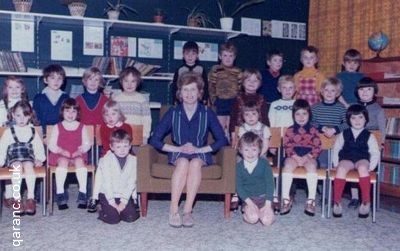 Here is John in his role as an RAMC Medic with a Doctor examining Reservists at Larkhill in 1975. 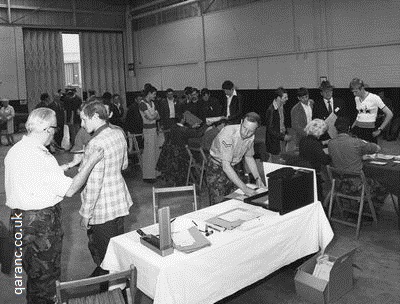 This is a picture of my dad, Emmanuel Leah. He was an ambulance driver with the RAMC and was evacuated from Dunkirk. He served in North Africa with the 1st Army, Italy, Sicily, Crete and all across Europe. He never spoke much about the War and used to let us play with his campaign medals until we lost them. His best friend Roy Howarth served in the RAF. Dad is second right on the front row. 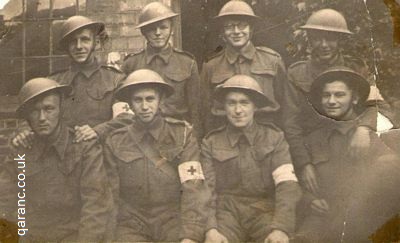 Mary now works at a homeless shelter as well as being involved with ex-Forces charities and NHS initiatives for former soldiers where she adds to the support for ex-Forces and their families. She is also a member of a choir specifically formed to raise funds for SSAFA. They will soon be recording a song written by a well-known songwriter which will be released later in the year.

She also supports another services charity called Sanctuary for Veterans and is helping to organise an event which will be taking place in Tarporley, Cheshire to coincide with Armed Forces Day so if anyone lives in the area and would like to support the charity financially or as a volunteer please get in touch.

Read about Mary’s earlier career in the QAs on the BMH Kluang page.


As an ex army wife I had both my children at BMH Rinteln and was grateful to the staff for their care. I was one of the fortunate mothers who only just made it to the delivery room in time to give birth on the second occasion, after having only 2 hours labour after being induced the first time. It is fortunate that I did not have a third confinement or I may have given birth on the hard shoulder of the autobhan from Bielefeld!

However it is for the care I was given during our three year posting for a chronic disease that I will always remember BMH Rinteln. Having been diagnosed shortly before being posted to Germany I was quite ignorant of this complaint and was told that, as it was a geriatric complaint, there were not many cases in a service hospital. I was often asked if I minded groups of nurses being present at various stages of my treatment for the experience it gave them. I did not mind and was only too glad to "help". However I was greatly surprised when I was eventually admitted to a hospital in Northern Scotland and found that there was a whole ward of patients with the same complaint whose ages ranged from 9 years to 69. I no longer felt like a curiosity. However I am grateful to the staff who attended me between 1974 and 1977 during my many stays in their tender care. Anne.


Here are my thoughts and past memories of Rinteln in the early 70's when I was a young recruit serving in BAOR. The fashion of the day, in the 70's, was to have long hair back in blighty - To avoid being 'picked up' for long hair on the Friday RSM's parade, before going on leave later that day, I reported sick with a black spot on my foot. I was immediately taken to Rinteln hospital to see a consultant who surgically removed the spot and put me on crutches for 12 days - needless to say I missed my leave.

I remember the kind trainee nurses whose job was to do all the mopping and cleaning of the wards for a year before they could become fully fledged nurses - they were always most friendly to us and made us laugh. I was in a ward with a musician who was having some sort of operation on his hand - we had great fun and because we had no one to visit us - we visited each other. Because he could walk he was ordered by Matron to push the tea trolley round the wards - whilst I was able to lounge on my bed all day - that was until the physio found me and started me back on a course of rigorous exercises.

Two men were also put in with us to have a Vasectomy under GA - One was big and brash and always shouting the odds about how easy the operation would be whilst the other was small and quiet. When they both came back from their op the big man was spark out for about 24 hours whilst the quieter man was up and about almost immediately.

My next visit was then in the eighties when my twin daughters were born - but that's another story!!! David.


We were delighted to hear from John McKnight who was a Corporal in the Royal Engineers and was the quiet man mentioned above!

I came across the site while I was looking for information about Hamelin as I was stationed there from 1971/1976. I happened to read a few stories about Rinteln Hospital and came across the one about the two guys in for a vasectomy under GA. I am99.99% sure the quiet one of the two was me and the date was 4th July 1974. I went down for the op around 0900/1000hrs and came at lunch time, the other guy had followed me and was back in bed, but out of it.

A young nurse came and as I was sitting up in bed asked if I was ok, and did I need anything, I asked if I could have a cup of tea and a fag. She did not bring me the tea but a different nurse did, and again she asked was I feeling ok. About 15mins after this I was offered lunch, which I had - and desert.