Can anyone please help name the boat that a Japanese officer allowed to leave harbour during the Fall of Singapore in 1942 in which the Captain of the ship was given a map of the mine field? 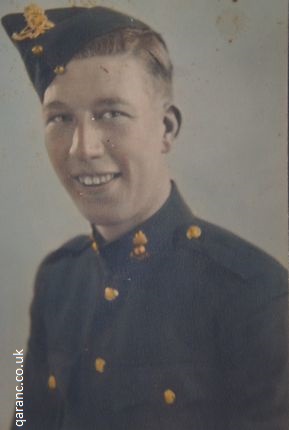 A son recalls his parents telling him that a Japanese officer permitted a boat, possibly a hospital ship, with wounded aboard, to leave Singapore Harbour during the fall of Singapore. The Japanese officer gave the captain of the ship a plan of the mine field around Singapore. It was the only ship allowed to leave. Unfortunately he cannot recall the name of the vessel. Whilst we know of those vessels that evacuated patients and nurses prior to the Battle of Singapore and the capitulation of the Allied Forces, we would love help with the name of this vessel. 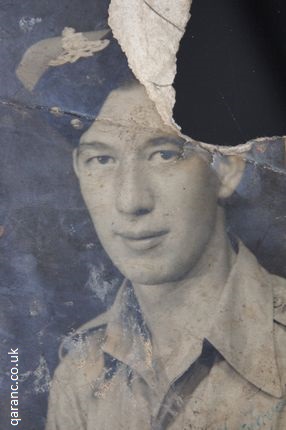 His father, Frank Holt Baines, was reported missing in action on 15 February 1942 during the fall of Singapore according to his military records and was not reported until 18 April 1942 at British General Hospital Poona in India. He was in the Royal Artillery and arrived in Singapore 13 January 1942, his unit was 15 Battery 1st A.A. Regiment. On the 15 May 1942 he joined the 187th/67th H.A.A.regiment from Deolali after leaving Poona hospital on 04 May 1942.


Below is the missing in action letter from the Officer i/c R.A. (H.A.A.) Records sent to his wife: 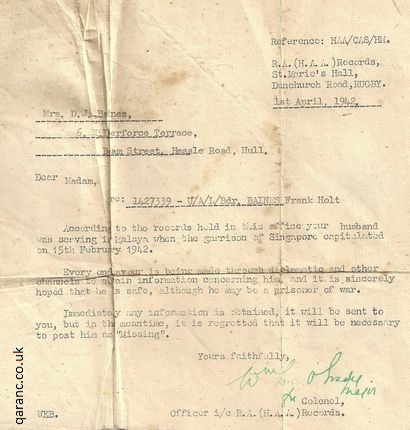 Dear Madam
Re: 1427339 – U/A/L/BDR BAINES Frank Holt
According to the records held in this office your husband was serving in Malaya when the garrison of Singapore capitulated on 15th February 1942.
Every endeavour is being made through diplomatic and other channels to obtain information concerning him and it is sincerely hoped that he is safe, although he may be a prisoner of war.
Immediately any information is obtained, it will be sent to you, but in the meantime, it is regretted that it will be necessary to post him as “Missing”.

In June his wife received this letter: 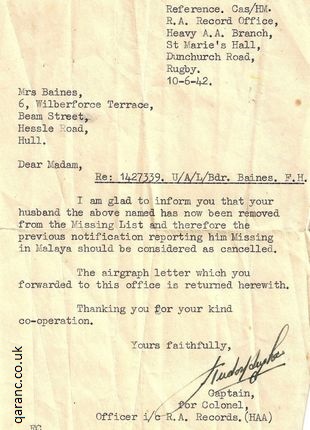 I am glad to inform you that your husband the above named has now been removed from the Missing List and therefore the previous notification reporting him Missing in Malaya should be considered cancelled.
The airgraph letter which you forwarded to this office is returned herewith.
Thanking you for your kind co-operation.


Frank Holt Baines enlisted on the 14 November 1938, his army number was 1427339 and his unit was the Royal Artillery Regiment RA (AA) 264. On the 17 November he was posted to 1/1 T.R. (which we think was a training camp). On the 4 March 1939 he was posted to 15/6 A.A. He soon joined the British Expeditionary Force (BEF) in Europe and disembarked from England on the 15 September 1939 to France/Belgium we think. On the 29 January 1940 the 15/6 A.A. becomes the 15 Battery 1ST A.A. Regiment. The brigade proceeded to France with the BEF. In January 1940, 1st AA Regiment was transferred from the Royal Engineers to the Royal Artillery as 1st Searchlight Regiment and joined 5th Searchlight Brigade. When the Battle of France opened on 10 May 1940, 1 AA Brigade was attached to General Headquarters BEF, with the following composition:

On the 1 June he was evacuated from Dunkirk as part of Operation Dynamo which took place from 27 May to 4 June.

He was promoted to Lance Bombardier on the 22 February 1941.

On the 15 March he was reported as Absent Without Leave and reported back to his unit on the 17 March. On the 22 March he forfeited two days pay. AWOL in the UK was not uncommon over short periods of time; this was normally due to transportation problems. It was more than likely that as he would have been travelling from Hull back to Bristol or Crewe delays with trains etc would have resulted in late returning to camp. The loss of only 2 days pay, the time he was late, shows that it was nothing more serious to this.

He was posted to the Far East and moved to port to embark on the 11 November 1941.

He disembarked in Singapore on the 13 January 1942.

On the 15 February he was reported missing in action on the fall of Singapore during 8th – 15th February 1942.

On the 18 April he was reported located. 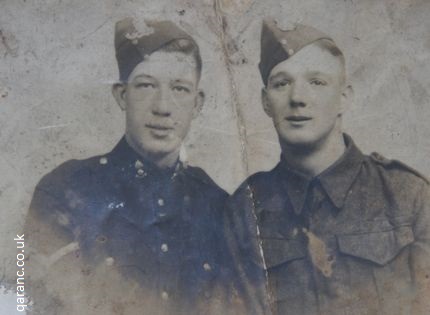 Pictured with his brother taken during 42/43. Frank was initially in hospital when his brother heard that he was there and paid him a visit. He was a driver.

On the 4 May he was discharged from British General Hospital Poona and reported to Deolali Depot.

On the 02 November he was placed on X List 11 (all ranks evacuated on medical grounds beyond RAP (Regimental Aid Post).

On the 13 December he was placed on X List 1X (all ranks posted to fill vacancies in authorised WEs (War Establishments) of a 2 NZEF Headquarters.

He then returned to the 187th/67th H.A.A. Regiment though we have no date for this.

On the 22 April he reverted back to the rank of Gunner at his own request.

On the 19 August he was placed on X List 11 (all ranks evacuated on medical grounds beyond RAP [Regimental Aid Post).

On the 7 September 1943 he was placed on X List 11 (all ranks evacuated on medical grounds beyond RAP [Regimental Aid Post).

On the 5 July he embarked Bombay Python.

From 25 July to 24 November he was posted to the BAOR (British Army of the Rhine) where he disembarked from the UK.

On the 27 July he joined E Battery Depot.

On 13 June he joined Section B RAR (Royal Artillery Reserves) Class A Release.

On 30 June 1959 he was discharged from reserve liability.