Information about the rank of Colonel Commandant of the Queen Alexandra's Royal Army Nursing Corps with the names, dates, ranks and awards


The Colonel Commandant (CC) of the Queen Alexandra's Royal Army Nursing Corps is a retired senior officer of the Corps who is appointed by the Military Secretary following approval by HM The Queen.

The title Colonel Commandant dates back to the period 1922 to 1928 when this name was used as a rank for Commonwealth militaries. It is now used as the title for Officers who hold the honorary appointment within a corps or regiment of the British Army. The equivalent rank is now Brigadier, those many QA Colonels have filled this role.

The Colonel Commandant does not have to have been the Director of Army Nursing Services during his or her military career.

The first QA Colonel Commandant not to have been a retired Director Army Nursing Services (DANS) and Matron-in-Chief (Army) was Colonel Joan Orford in 1974 who was a chief nursing tutor upon her retirement (cited in the book Queen Alexandra's Royal Army Nursing Corps (Famous Regts. S)

The period of tenure for the Colonel Commandants is between 3 to 5 years depending on his or her age and they usually retire when they reach 65 years.

The current serving Colonel Commandant automatically becomes trustee of the QA Association by dint of her appointment.


Below are the QA's who have become Colonels Commandants with their rank and nursing, civil and military awards:

Present Colonel Commandants of the QARANC

Colonel Sue Bush RRC was appointed the (ex-Regular) Colonel Commandant in May 2011.


Previous Colonels Commandants of the QARANC

Colonel Jane Davis OBE (Order of the British Empire) QVRM( Queen's Volunteer Reserves Medal) TD (Territorial Decoration) DL(Deputy Lieutenant for Greater London) QARANC(V) was appointed as one of the two Colonels Commandants in May 2014. Colonel Kevin Davies took over her role on 1st May 2020.

Colonel Rosemary Kennedy was Colonel Commandant from May 2008 to May 2014. Her nursing career began in London where after qualifying as a general nurse she studied midwifery and district nursing. Col Kennedy then worked in care of the elderly and attained the Diploma of Nursing and then Master of Science degree in research and evaluation. Whilst working in senior nursing and management positions Colonel Rosemary Kennedy joined the Territorial Army.

In 1999 Rosemary Kennedy was appointed the Chief Nurse for Wales. She retired from the TA in 2007 and was retained as Honorary Civilian Consultant (Army) for Nursing to the Director General Army Medical Services.

In 1999 Colonel McEvilly was appointed Director Army Nursing Services and retired in 2002. She was appointed Health Inspector to Her Majesty's Inspector of Prisons for England and Wales.


Brigadier Arigho retired from the appointment of Colonel Commandant in December 2008. Her replacement was Colonel Bridget McEvilly and for the first time in the history of the QAs there was be a second Colonel Commandant who was Col Rosemary Kennedy a retired TA QA. Col Kennedy was appointed in May 2008. There are now two Colonel Commandants to help split the work up.


Prior to the rank title change of 1950 the Colonel Commandant was known as the Controller Commandment (cited in the book Queen Alexandra's Royal Army Nursing Corps (Famous Regts. S)


Another page of interest if the QAIMNS (Queen Alexandra's Imperial Military Nursing Service) Matrons In Chief.

The photo below is of Col Valerie Smith Colonel Commandant of the QAs in 1987. The photograph was taken at her retirement at the QATC. 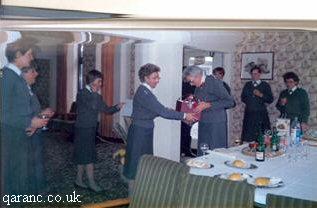 She was born in Portsmouth on the 29 January 1935. Her nurse training started in 1952 at the Royal Surrey County Hospital in Guildford. After qualifying as a general nurse Diana Anderson trained as a midwife at Freedom Fields Hospital in Plymouth and the Royal Hampshire County Hospital in Winchester. In February 1958 Diana Anderson joined the QARANC as a Nursing Officer where she worked as a midwife in many military hospitals.

Captain Anderson was awarded the ARRC in 1967.

In 1968 she trained as a Midwife Teacher. Once qualified she joined the tutorial staff at the Louise Margaret Maternity Hospital in Aldershot. She was an examiner of the Central Midwives Board.

When promoted to Colonel she became the Matron of the QEMH Woolwich and other administration posts followed which included Deputy Medical Nursing at Headquarters BAOR and her final posting was as Commandant of the QA Centre at the Royal Pavilion in Aldershot. She was remembered for restoring the grounds of the Royal Pavilion after the storms of the late 1980s.

Upon retiring Colonel D G M Anderson was appointed the Colonel Commandant of the QAs.

She was affectionately nicknamed Andy by her friends and loved sailing and tennis.

The obituary of Colonel Anderson appeared in Vol 11 No 2 of The Gazette of the Queen Alexandra's Royal Army Nursing Corps Association and was written by Brigadier (Retd) J M Field CBE RRC and Colonel (Retd) R L Johnson RRC .