QA's past and present will find the War and Medicine Exhibition held at the Wellcome Collection, 183 Euston Road, London from the 22 November 2008 to 15 February 2009 fascinating. The War and Medicine Exhibition explores the unique influence that war has had on field medicine and nursing. This free exhibition is the second of a series of exhibitions that are run in partnership with the Deutsches Hygiene Museum in Dresden, Germany. It sharply contrasts that whilst war will maim and kill it also brings out mankind's desire to repair and heal. This is exhibited through the work of artists, writers and film makers as well as medical scientists and social historians. The War and Medicine Exhibition will include a range of associated events and tours which explore the paradoxical relationship between war and medicine. These events include film screenings, debates and tours. Speakers include Simon Wessely the Director of King’s Centre for Military Health Research, Institute of Psychiatry and Martin Conway the Professor of Cognitive Psychology at the University of Leeds. These events are listed in more detail at wellcomecollection.org


For example the image below, entitled Aid Post, is from the Wellcome Library, London collection and depicts a World War I aid post. The drawing was in coloured chalks by the English artist Austin Osman Spare who was a medical orderly in the Royal Army Medical Corps (RAMC) in London hospitals from 1917. In 1919 Austin Osman Spare was commissioned as an official War Artist and visited the battlefields of France to record the work of the RAMC. 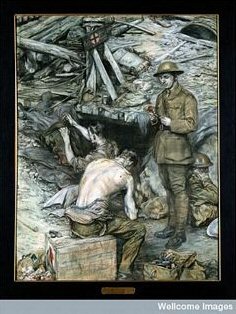 Medicine and nursing has seen many advances in the battlefield which have been used throughout civilian hospitals. Much like the military have made improvements and huge advances in weaponry so too have the QAIMNS, then the QARANC and the RAMC upon the world of treatment and nursing care. These are highlighted throughout the War and Medicine Exhibition guiding the visitor from the lessons learnt in the bloody battlefields of the Crimean War with their huge volumes of casualties through to modern day theatres of war and peace keeping such as Afghanistan and Iraq where QA's continue to serve the British Army in the front line. Such advances include plastic surgery as facial injuries and wounds were reconstructed during and after the Great War and modern day insights into Post Traumatic Stress Disorder (PTSD) and Gulf War Syndrome.


The photo below is of a painted tin face mask from 1918. It is from the Gillies Archives, Queen Mary's Hospital, Sidcup UK. This painted tin face mask from WWI was made by dental technician Archie Lane. During World War I the Queen's Hospital became the leading centre in Britain for maxillofacial and plastic surgery. Over 5000 servicemen were admitted to the wards of the Queen Mary's Hospital from 1917 to 1921. 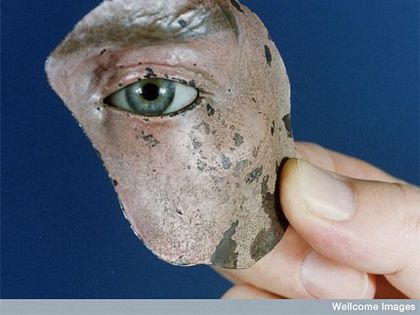 Included in the War and Medicine Exhibition are personal experiences and accounts from a range of personnel who have experienced war and conflict. This not only includes nurses but also surgeons, soldiers, civilians, writers and artists.


The Home Front is also explored during the War and Medicine Exhibition. For example the poster below is called Keep Fighting Fit from the collection held at the Wellcome Library, London. It provides health information for those on the home front giving healthy practices for those using air-raid shelters. It was published for the H.M. Stationery Office. Tips included to wash all over if it were possible to do so before going to the shelter. Change all underclothes before going to the shelter - they need airing after daytime wear. Germs of many diseases enter through the mouth - try always to wash your hands before you handle food. Remove all bedding from shelter frequently for cleaning and airing. Keep the ventilators open - you must have fresh air from outside. Don't leave litter about - even crumbs encourage vermin and flies, both carriers of disease. Keep fighting fit. 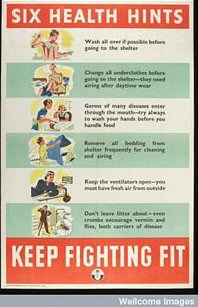 During times of war those who deliver medicine are confronted not only with the worst that human beings can inflict on one another, but also with a whole range of difficult decisions - ethical as well as medical. Concentrating on the modern era, this exhibition looks at some of the extraordinary difficulties faced by doctors, surgeons, administrators, nurses and their patients in war time. It also considers what has been learned from such extreme circumstances and the wider implications for our society and for our health.


The coloured chalk drawing below was by the Dutch painter and cartoonist Louis Raemaekers who created many works of anti German propaganda. It is entitled German Navy Attacking and depicts a RED Cross VAD being drowned. It is shown on qaranc.co.uk with thanks to the Wellcome Library, London. 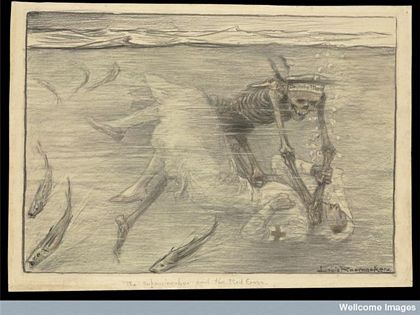 There are over 200 exhibits on display in the War and Medicine Exhibition which not only include artefacts and objects but also recordings . These have been sourced from major museums and galleries, throughout the UK and overseas. These include the Imperial War Museum, British Red Cross Museum, Deutsches Historisches Museum Berlin and the National Army Museum.


The chalk drawing below depicts an operation for appendicitis at the Military Hospital, Endell Street, London. This Women's Military Hospital was entirely staffed by women and was founded in 1915 by a group of public spirited women who were determined to prove that women could run hospitals, whether as medical, management, or ancillary staff. Two of the founders were suffragettes, Louisa Garrett Anderson and Dr Flora Murray. Sir Alfred Keogh the Director of the Royal Army Medical Corps invited the women to set up the hospital though other members of the RAMC thought it would not work and close soon after opening. The Military Hospital in Endell Street opened during the Great War and cared for wounded servicemen and did not close until well after the end of WWI in December 1919. 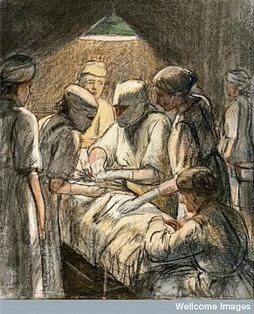 The War and Medicine Exhibition takes place from the 22 November 2008 to the 15 February 2009 at the Wellcome Collection, 183 Euston Road, London NW1 2BE. Admission is free and the gallery opening times are from:

Tuesday, Wednesday, Friday and Saturday 10.00am to 6pm

It is closed on a Monday with the exception of Bank Holidays when it will be open from 10am until 6pm.

For more information about the War and Medicine Exhibition please visit www.wellcomecollection.org/warandmedicine

The watercolour sketch below is from The RAMC Muniment Collection which is in the care of the Wellcome Library. The eye diseases sketches were by Leo Rawlings during World War Two in Changi Camp during the Japanese occupation of Singapore. It shows eye cases problems from those suffering from vitamin deficiency, conjunctivitis and sun blindness. This is one of ten watercolour sketches by Leo Rawlings of prisoners of war suffering from tropical and deficiency diseases. 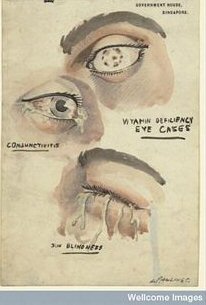 Below are some images of mechanical substitute for the arms from the Wellcome Library, London. These old hand prosthetics from 1919 are a selection of appliances from Mr George Thomson's 'Mechanical Substitute for The Arms', used by an amputee who had lost both his arms at the shoulders. The tools clipped to a mechanical arm, which was then attached to an ordinary dinning table. 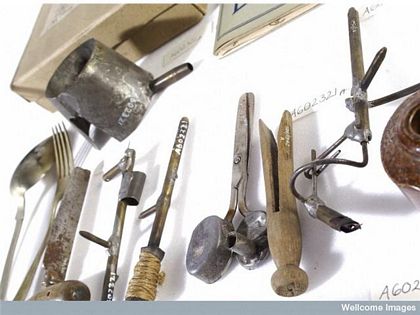